Homes for Sale in Victory at Verrado

Homes for Sale in Victory at Verrado, Buckeye AZ 85396

About Victory at Verrado

Victory at Verrado has a different feel than the mega-retirement communities. It is small and intimate with world-class amenities. The community is known for gorgeous views of the desert, night light views of Phoenix and the White Tank Mountains. Amenity high lights include one golf course, four pools, Victory Club, Vic's Bar, and Kitchen and even a vineyard. The clubhouse and recreation center are nestled on top of a cliff. To live in Victory one person on the title must be 55+.

There are currently five different home builders in the community. When build-out is complete, there will be around 3,500 homes on 1,200 acres.  Currently, phase 2 is being built. Overall, the Victory at Verrado community will be a many-year project. Phase I, with all 4 of the original builders combined, was around 400 rooftops. There is plenty of land surrounding the community, so if demand is there, plans for more homes could happen. Victory at Verrado real estate is appreciating and is currently in a seller's market.

Interesting Fact: Grand opening day in Victory at Verrado
The community held it’s grand opening in January of 2016. 250 people lined up to buy homes there that day.

Who lives in Victory at Verrado?

According to the new home sales center, 45 percent of home buyers come from Arizona.

Homes for Sale in Victory at Verrado

Most of the homes for sale in Victory at Verrado are new with a few resale homes popping up now and again. You will find the latest floor plans and energy efficiencies. Some of the floor plans are an entertainer's dream, and others offer an extension of the master bedroom, called an "owner retreat." Floor plans range in size from 1400 to 3500+ sq. Ft. The new home center has 11 Victory at Verrado models to explore. New home base prices start in the mid $200k’s to the high $880’s. So far, one million dollar home has sold. Victory at Verrado real estate prices are considered higher than the older retirement communities.

Amenities in Victory at Verrado include four outdoor pools, four tennis courts, eight pickleball courts, and a state-of-the-art recreation center called the Victory Club. They all sit at the top of a hill at the base of Tiger Mountain. It overlooks the community with breathtaking views of the desert landscape. The Victory Club is the hub of activity boasting a vineyard, Vic’s Bar and Kitchen, the pools and the Life Performance Fitness Center and the Spa at Victory Club. While dining at Vic’s you have a magnificent view of 3 cascading resort-style pools surrounded by towering palm trees and beautiful desert scenery. Another fun spot is the Big Patio where a weekly happy hour and events take place. There is an 18-hole golf course that opened in 2017.

Victory at Verrado is all about the community while being pampered, active, and having fun. As a resident, you can participate in and have access to all the amenities, clubs, and activities that the all-age community of Verrado has to offer. This includes restaurants, retail, and Verrado Country Club located on the Center at Main in the Verrado Town Center. This and more are included in the recreation HOA fee. Amenities and clubs exclusive to Victory are not available to the public with the exception of Vic’s, the spa, and the Victory golf course.

To sum it all up, Victory at Verrado is a community to consider if you are looking for a smaller, new, high-end retirement community in a large mastered planned community. Victory has a hometown feel that has, as one buyer puts it, "a Vibe that is community." Those that consider Victory also consider other communities that are building new homes like PebbleCreek, Trilogy, CantaMia, and Sun City Grand. 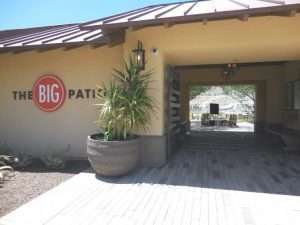 The Big Patio at Victory at Verrado

Victory at Verrado Amenities and Clubs

The Victory Golf Club is perched just below the Victory Club. It is planned to have a pro shop and its own bar and grill. The Victory golf course is designed to be fun and playable at all levels. Depending on time 6, 9 or 18 holes can be played. The course was designed by Tom Lehamn and takes full advantage of boulders and mountains of the White Tank Mountains. More about Victory Golf.

What's close by Victory at Verrado?

Victory at Verrado is located in Buckeye, Arizona. It is a part of the larger mastered planned family community of Verrado. It is 33.9 miles from the Phoenix airport which takes about 38 minutes with no traffic issues.

The nearest shopping and dining is on Verrado's Main Street. Bashas Grocer, CBS Pharmacy, several restaurants, salon, and various professional services including medical.  Banner Health Center is on Verrado Way and 1-10 about 6 miles a way. The nearest emergency center is West Valley Emergency Center about 4.5 miles outside of Verrado. Abrazzo Hospital in Goodyear is about 10 miles away. The closest Spring Training is in Goodyear. 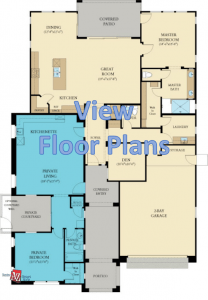 What are the HOA Fees in Victory at Verrado?

The HOA Fees in Victory at Verrado include all the amenities in the community and the single-family area of Verrado. If you have grandkids, do keep in mind, that they cannot use any of the pools in Victory's active adult community. Instead, they are welcome to use the family pools in Verrado. If you think about it, they are more likely to have fun there as there are lots of kids to play with.

Information deemed reliable but not guaranteed. Please confirm and verify the information for yourself.

Want to compare Victory at Verrado HOA and community fees to other retirement communities? 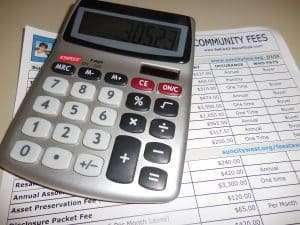 Victory at Verrado started out with four builders there are now five. With so many choices there is a style and price range to fit every budget and taste.

Builder in Victory at Verrado

CalAtlantic Homes offers six models at Victory at Verrado. Homes range in size from 1,542 to 1,870 Sq. Ft. All models feature 2 or 3 bedrooms, 2 to 2.5 bathrooms. Some models have great options like a tandem garage, a second-floor loft, or an optional 3rd bedroom. Most of the homes have optional fireplaces.  Currently, there are 3 model homes to view in the model home neighborhood they are the Entertainer, Trendsetter, and Traveler floor plans.

There are nine different Lennar floor plans to choose from in Victory at Verrado. There are five plans called Encore Series and four called the Inspiration Series. Encore homes range in size from 1,897 to 2,300 Sq. Ft. Inspiration homes range in size from 1,222 to 1,657 Sq. Ft. Home options offer two bedrooms and a den, and 2 to 2.5 baths. Each Lennar home also features a two or 2.5 garage. The Pinnacle plan offers a NEXTGen home within a home that is 546 sq. Ft. It’s a private suite with its own bedroom, bathroom, private entrance, Kitchenette Laundry, and living area. Currently, there are 5 model homes to view in the model home neighborhood they are the Pinnacle, Crest, Summit, Armstrong, and Kennedy floor plans.

The Venture II collection by Taylor Morrison is five distinct floor plans in Victory at Verrado. The homes range in size from 2,234 to 2,870 square feet with 2 to 3 bedrooms and 2.5 to 3.5 bathrooms. Some of the homes have options for a 3rd side garage, and some two-car garages have additional space for storage or a golf cart. There are many options to choose from to customize. Currently, there are 2 model homes to view in the model home neighborhood they are the Shire and the Appaloosa floor plans.

Maracay Homes was the top-selling builder in 2017 at Victory at Verrado. They offer five single-family home designs. Homes range from 2,280 to 2,870 Sq. Ft., so their niche is larger homes. These single-level homes are low-maintenance and feature 2 to 4 bedrooms, as well as, a den. Homes also include 2 to 2.5 bathrooms, depending on the model. There are many flex options like a "snore" room and my favorite, a pet washing station in the laundry room. Some of the plans offer tandem garages, bonus rooms, or casitas. Currently, there are 3 model homes to view in the model home neighborhood they are the Entertainer, Trendsetter, and traveler floor plans.

TW Lewis by David Weekley Homes offers the largest collection of homes in Victory at Verrado with 17-floor plans. They also offer the largest floor plans. There are 11 plans called Mountainside Series and seven called the Encore Series. Mountainside homes range in size from 1,459 to 2,269 Sq. Ft. Encore homes range in size from 2,563 to 3,381 Sq. Ft. There are both 40 foot and 50 foot lots to choose from. All the homes have 2 or more bathrooms with the larger homes having four as an option. The designs are highly customizable and offer a number of optional options for extra space. One of those options is a second-story retreat. Currently, there are 3 model homes to view in the model home neighborhood they are the Fruition, Serendipity, and Discover floor plans.

Prices for new homes currently stat in the low to mid $200k's. For choice homes on the golf course with the best views and location, you can expect to be over $1 million.

If you are considering buying new, the community has two ways to experience Victory; a one-day guest pass and a 3 or 4-night stay over visit.  To find out more, contact Sharon Rowlson 623.552.0228 or Sharon@RetireAZ-ResortStyle.com

Get In Touch With Sharon

Thinking of Selling in Victory at Verrado? Find out how much your home is worth. 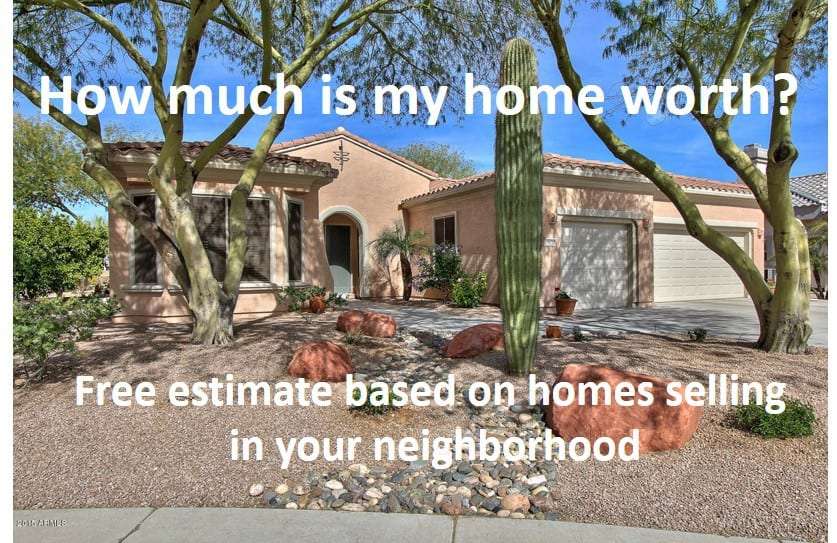 You can create an account and or login in to modify and save this search below. This property search IDX is the same one REALTORS use and is provided by the Arizona MLS (Arizona Multiple Listing Service). It is accurate with live data. 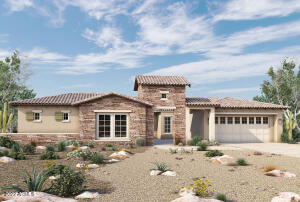 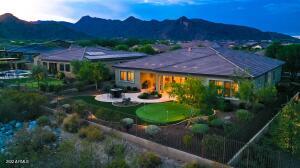 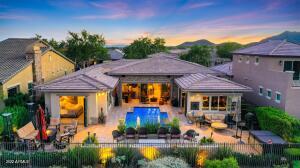 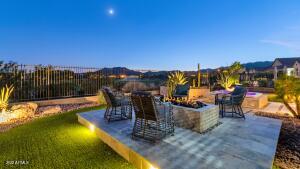 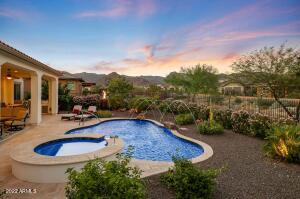 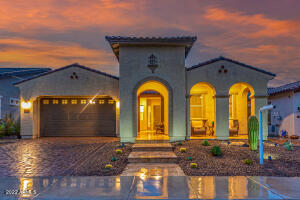 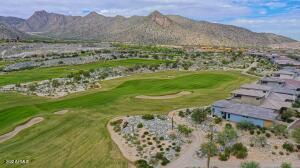 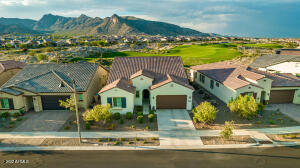 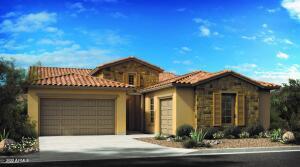